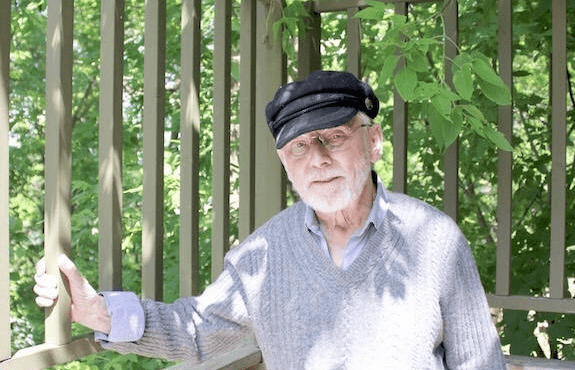 Renowned for his impressionistic scenes of Winnipeg and its iconic landmarks, Roman Świderek’s artwork can be found across Canada and abroad. His images serve as reminders of home and mementos of Manitoba, linking us to our past and making marks in our historical timeline.

For many Winnipeggers, images of Assiniboine Park, the Bridge Drive-Inn, The Forks and Morning Practice on the rink, conjure a familiar rhythm. Skillfully rendered in oils, these finely observed paintings frame Winnipeg through the past decades and present a view of our great city through the eyes of an exceptional artist.

Born in Poland, Roman Świderek began his career painting backdrops for the professional theatre group in his town, Lodz. His talents received early recognition and he refined his skills in a studio provided by his company. After immigrating to Canada in 1961, his artistic skills evolved while painting religious icons for churches, portraits of national leaders and set designs for theaters including Rainbow Stage, the Manitoba Theater Centre and the Royal Winnipeg Ballet. From 1965 to 1989, Świderek founded four companies with a design focus for the fashion industry in Winnipeg including the Hudson’s Bay Company blanket division. In 1989, he put aside the business world to focus on his art career. “I came here for a better life: to improve myself and my family,” and he did; quoted from an interview with the artist in preparation for his retrospective solo exhibition ‘Roman Swiderek’s Winnipeg’ March 2018. 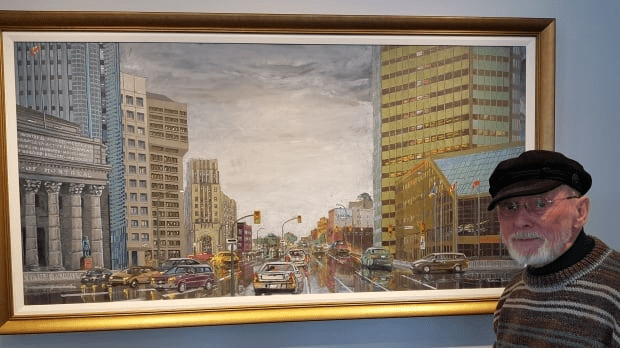 “I came here for a better life: to improve myself and my family”

A steadfast Winnipegger for almost 60 years, Roman Świderek was liberated by the outdoors and embraced our notorious winters. For many years and with great passion, Swiderek would dog sled with his huskies along his favourite Winnipeg feature, the Red River, enjoying the snow and the open sky above him. “It always amazed me that, here I was mushing dogs on the same river mentioned in Jack London’s books that I read as a child in Poland.” Roman Swiderek’s Winnipeg, March 2018.

While in Canada, Świderek became an avid adventurer and explorer, painting scenes from northern Manitoba, to Victoria, and across the country to the east coast. One of his favourite places to visit and paint were the Rocky Mountains. For thirteen years, Świderek travelled to the Columbia Icefields in spring and fall to paint and display his artwork. “In the spring I would visit, paint, and set up a show in the Icefields iconic red chalet. The majesty of the Rockies and the quiet and peacefulness of nature when off the beaten path, made those hours of painting seem but moments,” Świderek March 2018. His time in the Rockies ended when the Chalet was demolished to make way for a new building.

Shortly thereafter, the 1997 Red River Flood of the Century was happening at home in Winnipeg. Moved to help his beloved city, Świderek created a series of watercolour paintings which were marketed in a calendar and fundraiser for Manitobans who were flooded from their homes. He raised over $100,000 for Manitoba flood relief. The original paintings were purchased by Wawanesa Insurance and donated to the City of Winnipeg.

“I paint because I am compelled to do so”

An artist to his core, “I paint because I am compelled to do so” Świderek March 2018, he chose his images carefully, painting landmarks and images of his city that people can recognize and relate to. With purpose, Roman Świderek crafted his work within a familiar tradition and aimed his art at a common viewer. The works invite us to connect in the honesty and mutuality of his experience. Świderek’s paintings of Winnipeg began with many plein-air studies. He would spend hours at the site drawing, getting a feel for the location and the activity of the area. In pencil, he would sketch different perspectives and the small details of the buildings he later painted. Sometimes he would thoroughly research a building, referring to historical details and the buildings origins. Like setting a stage, each painting took months to complete and together now, they form a monumental heritage.

Woodlands Gallery and Roman Świderek have a long history together. We have supported his career through the years by carrying his limited-edition reproductions and art cards featuring iconic images of Winnipeg. For many of these iconic images, the commercial availability of their original paintings was a first during his retrospective exhibition ‘Roman Swiderek’s Winnipeg’ in March 2018; several of the originals had previously never been exhibited publicly or available for purchase.

Roman Świderek’s dedication to artistic excellence serves as an inspiration and incentive for other Manitoban artists to follow. He will be greatly missed and always remembered.